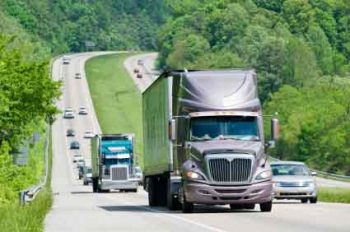 Each year, lawyers in Los Angeles and throughout the country work with countless families who have lost loved ones due to truck accidents. While the safety standards of the trucking industry has been a topic of debate for years, the recent crash involving comedian Tracy Morgan has sharply increased the fervor of these debates.

According to the NTSB, the driver of the rig that struck the vehicle carrying Tracy Morgan and his friends had not slept in the past 24 hours. At the time of the crash, Kevin Roper, the Wal-Mart truck driver, had been driving for 13 hours and 31 minutes. Additionally, he was traveling 65 mph in a 45 mph zone.

Currently, the legal limit for truck drivers is 14 hours of consecutive driving time, after which they must take a break. The Wal-Mart truck had been equipped with state-of-the-art technology, including sophisticated collision-avoidance systems. It appears that this advanced technology was not sufficient enough to overcome driver fatigue and reckless driving.

Tracy Morgan had been listed in critical condition after the truck accident. He is now recovering in a rehabilitation facility. James McNair, a comedy writer and Morgan’s friend, was not as lucky. The crash claimed his life. Roper has pleaded not guilty to four counts of assault and one count of death by auto. It is unknown if the family plans to consult a truck accident lawyer to seek compensation for their losses.

The Tracy Morgan limousine van crash is only one example, albeit a high-profile one, of the greater problem in the U.S. Each year, about 5,000 people lose their lives in truck accidents. Truck accidents have the potential to be much more deadly and devastating than accidents involving other motor vehicles, given the size and weight of a big rig. While drivers and passengers in cars are much more vulnerable, drivers of big rigs can also become seriously injured or killed in these accidents. About 800 truck drivers each year lose their lives in accidents.

A significant factor in truck accidents is driver fatigue. Truck drivers work an alarming number of consecutive hours on a regular basis, often logging 72 hours of driving within an eight-day time period. Then, truckers might have 34 consecutive hours of time off before the cycle begins again. The stressful nature of the occupation combined with the monotonous and soporific nature of driving itself is a recipe for disaster.

Despite the debate about truck safety issues, just a week before the Tracy Morgan accident, legislation was in motion to weaken safety rules for the trucking industry. The Senate Appropriations Committee passed an amendment to bypass the requirement that truck drivers get at least 34 consecutive hours of rest, including two nights, before beginning a work week. The requirement for 34 consecutive hours of rest had been part of work hour regulations passed in July 2013.

However, in the wake of the Tracy Morgan accident, the senators from New Jersey have both discussed the need for legislation to reduce the risk of truck accidents on the nation’s roadways. Senators Cory Booker and Robert Menendez have stated that they plan to sponsor legislation that would repeal the amendment recently passed by the Senate Appropriations Committee. Additionally, Senator Booker has asked the U.S. Department of Transportation to reconsider truck weights.

Everyone who uses the nation’s roadways is at risk of becoming the next truck accident victim. If you or a loved one sustained injuries in an accident caused by a truck driver, you could be eligible to file a truck accident lawsuit in California. Your attorney may find that the truck driver was speeding or otherwise driving recklessly, or that the driver violated safety regulations at the time of the collision.

However, there are time limits involved in filing a legal claim, which is why it’s imperative to contact a Los Angeles truck accident lawyer at Ellis Injury Law right away. Call 310-641-3335 today to learn about your legal rights and options.