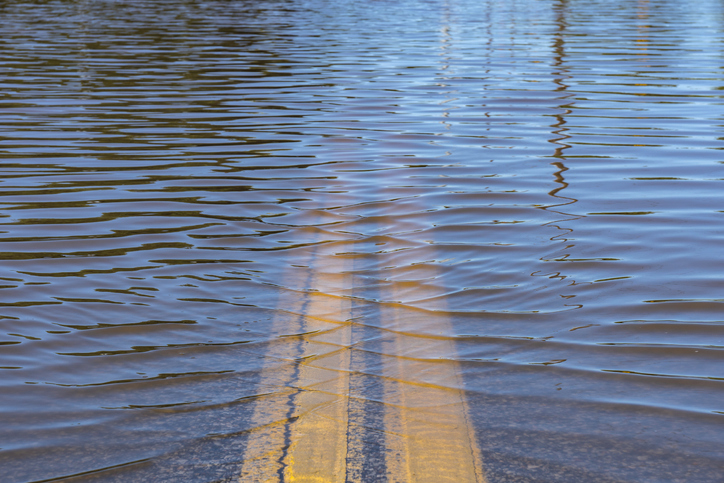 Passengers were in for a rude awakening when mud and debris hit the windows, as Southwest Airlines Flight 278 overshot the runway. The accident occurred at 9:05 a.m. as the plane from Oakland attempted to land at Burbank’s Bob Hope Airport in torrential downpour. Up to half an inch of rain was falling, with a flood advisory in effect and visibility down to one mile. Eyewitnesses report the plane began sliding around in an irregular fashion, signaling that something was amiss. The crew deployed emergency slides to help get passengers off the badly wrecked Boeing 737. FAA inspectors and firefighters in high-visibility attire attended the scene.

According to a tweet from Southwest passenger Moe Storch, the plane hydroplaned on a wet runway, but the pilot was able to regain control, slam the brakes, and reverse thrust “just in time.” After the plane careened off the end of Runway 8, it was stopped by the Engineered Material Arresting System, designed to prevent catastrophe. Instagram user Pete Nicks posted: “We are alive. The plane was a few feet from plowing thru the barrier and taking out numerous cars. Crazy stuff.” T    witter user Megan Pepper said she was driving down Hollywood Way and thought the plane was going to crash into her.

Despite the rainfall and flood warnings in the area, the airport remains open. In a typical December, Burbank receives 2.4 inches of rainfall; today, however, the city saw 1.66 inches in just six hours. A temporary ground stop this morning kept incoming flights in the air for an additional 45 minutes, while the chaos sorted out. Southwest temporarily suspended operations, cancelling at least 20 departures. The company hoped to resume operations some time after 4 p.m. local time, but did not promise a specific timetable. Southwest promised to refund the cost of the tickets and “make an additional gesture of good will.”

None of the 112 passengers or five crew members reported immediate injuries. Often in these crashes some patients will later opt to go to the hospital for contusions, deep lacerations, and whiplash neck pain. LA personal injury attorneys are on high alert to field any inquiries as to possible liability. It is up to the airline company to avoid flying and landing in severely inclement weather conditions.

The current winter storm has caused major traffic disturbances, flash flood warnings, rockslides, and mudslides. Much of the flooding and mudslide conditions are attributed to heavy rains in the burn scar Woolsey Fire and Holy Fire areas in Los Angeles. Also late-breaking today:

If you or a loved one were injured in a weather-related accident, it costs nothing to speak with a personal injury attorney at Ellis Injury Law Firm. Sometimes we come to find out an “accident” was not entirely without blame. When serious errors have been made, negligent parties can be ordered to pay injured victims compensation for past, present, and future medical bills, lost wages, pain, and suffering. Our clients pay nothing unless we win, so you have nothing to lose and everything to gain. In the State of California, you have up to two years from the date of the accident or discovery of injury, so do not delay.