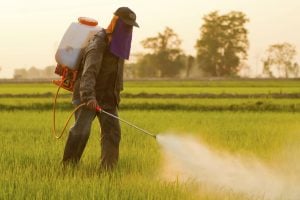 Roundup is a popular weed killer used by homeowners and commercial farmers throughout the U.S. and around the world. Manufactured by Monsanto Co., the lucrative herbicide earned the company almost $5 billion in 2015. But some plaintiffs are claiming that Roundup causes cancer – citing mounting evidence that links the product’s active ingredient, glyphosate, to non-Hodgkin lymphoma.
Monsanto is currently fending off claims that it was aware of the inherent health hazards of Roundup but took no actions to warn consumers or federal regulatory agencies.
The national product liability lawyers at Ellis Injury Law are currently reviewing potential cases for those who have been diagnosed with lymphoma or other types of cancer that may have resulted from prolonged Roundup exposure.

Grounds for filing a Monsanto lawsuit

Concerns about the safety of Roundup have plagued Monsanto for years. Those fears have only grown after the World Health Organization, in 2015, declared that glyphosate was ‘probably carcinogenic’ to humans. A few months later, California’s Environmental Health Hazard Assessment team announced that glyphosate would be listed as a cancer-causing agent under Proposition 65.
At present, Monsanto has been hit with more than 700 product liability lawsuits filed by people who charge that exposure to the company’s herbicides in the 1970s and 80s caused them to develop cancer. One recent Monsanto lawsuit alleges that the agrochemical giant led a “campaign of misinformation to convince government agencies, farmers and the general population that Roundup was safe.”
Researchers have been documenting the long-term side effects of glyphosate for years, finding that sick agricultural workers have higher concentrations of glyphosate in their systems. Nerve damage, Parkinson’s disease, various forms of cancer and non-Hodgkin lymphoma are just some of the debilitating health problems found in farmers who used the herbicide in the course of their work.
A 2016 wrongful death complaint, brought by the widow of a California farmer who died of a particularly aggressive type of non-Hodgkin lymphoma, claims that Monsanto failed to sufficiently warn agricultural workers that glyphosate causes cancer. The plaintiff is also suing on counts of defective design and negligence, and contends that the company deceived millions of farmers concerning the health risks of Roundup.
Individuals who used Roundup and were later diagnosed with lymphoma or other serious health issues may have grounds for seeking compensation against Monsanto.

Does Roundup cause cancer?

Findings from a new study show that Roundup is associated with a slew of diseases and health hazards, including cancer, infertility and possibly Parkinson’s. The research, which was peer-reviewed, was published in the journal Entropy, reports Reuters. Led by MIT scientist Stephanie Seneff and retired consultant Anthony Samsel, the study found that glyphosate induces inflammation and cellular damages throughout the body that can trigger the onset of disease. Traces of this toxic herbicide have been found in genetically modified food crops onto which it was sprayed.
In 2011, the Environmental Protection Agency announced it was reviewing a report sponsored in part by the National Institutes of Health that had discovered a two-fold increased risk of multiple myeloma (a bone marrow cancer) among people who used glyphosate compared to those who did not.
This builds on earlier research conducted by Swedish scientists Dr. Mikael Eriksson and Dr. Lennart Hardell, who determined that glyphosate was inextricably linked to non-Hodgkin lymphoma. The findings were published in the March 1999 edition of the Journal of American Cancer Society, and were based on a population-based case-control study from 1987 to 1990.

Is Roundup safe to use at home?

However, the looming question is the potential health hazards resulting from low levels of Roundup exposure over prolonged periods of time.

Speak with a Roundup cancer lawyer

Ellis Law has extensive experience litigating and winning cases involving defective and dangerous products in Southern California. Individuals who have developed myeloma leukemia or non-Hodgkin lymphoma after using Roundup may be entitled to significant financial compensation. A Roundup lawsuit can secure reparations for lost income, hospital and medical expenses, emotional suffering, diminished earning capacity, as well as other economic losses.
To find out if you or someone you love is eligible for compensation from Monsanto, we invite you to call our office for free and confidential legal consultation. Our award-winning personal injury attorneys are dedicated to providing unrivaled advocacy and representation. Call toll-free at 310-641-3335.