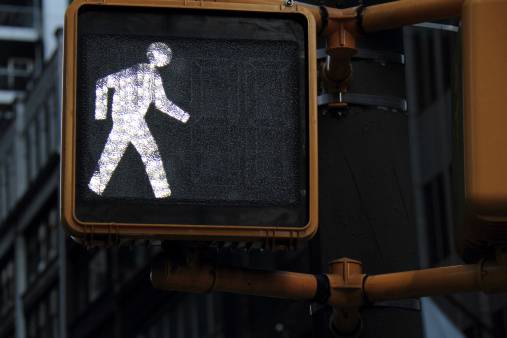 Los Angeles has one of the worst reputations for pedestrian safety and hit-and-run accidents, averaging about 200 traffic fatalities each year. Of the many busy intersections in the city, perhaps none is more notorious for pedestrian hazards than the iconic crossing of Hollywood and Highland – which attracts thousands of tourists annually. Just last year, the congested intersection was the site of at least 13 pedestrian accidents, but that is all changing thanks to a new pedestrian signal that was installed last November.

City engineers knew that re-designing traffic intersections was cost-prohibitive and unrealistic, so they looked to new innovations to help reduce the incidence of pedestrian knock-downs.

Engineers devised what is known as a “scramble” traffic signal that adds an extra light cycle targeted for pedestrians, allowing them to safely cross the street while traffic is stopped. Experts say that the scramble traffic signal at Hollywood and Highland has produced measurable results, with no reported injuries or deaths since the device was implemented this year.

Use of scramble intersections at busy crossings is growing throughout Los Angeles and southern California, helping to augment safety for pedestrians traveling on foot or by bicycle. Santa Monica recently added a dozen of these new traffic tools and more cities are expected to follow suit.

The city has also implemented other hybrid solutions to reduce traffic injuries, including an “LPI” (Leading Pedestrian Interval) traffic light that gives pedestrians a four second head-start before the light turns green for vehicles. Other streets have been outfitted with bright yellow flashing signs indicating pedestrian traffic in the hopes of alerting drivers to their presence.

Los Angeles city officials have also put priority on re-striping intersections where there is a high rate of accidents.  Using a continental pattern of white and yellow zebra stripes, the aim is alert drivers to pedestrian zones more readily. However, an estimated 15,000 city intersections have yet to be re-striped, as the process is now performed only when city roads are repaved.

Two-thirds of the serious and fatal traffic accidents in Los Angeles occur on less than 3 percent of the roads, says Mike Bonin, chair of the City Council’s transportation committee. Officials hope that recent and ongoing traffic tools will make a substantial impact on pedestrian safety, but there remains a lot to be accomplished.

As part of Los Angeles’ Vision Zero Plan, which hopes to have zero traffic deaths by 2015, many more physical changes and improvements will be implemented in the coming years as regulators target on areas marked by high injury rates.

There is no doubt that pedestrians are incredibly vulnerable to serious injury in LA. When negligence is a contributing factor, victims have the right to seek legal reparations.  The Los Angeles car accident lawyers at Ellis Law have successfully litigated dozens of pedestrian knock-down cases and have the resources and experience to pursue full compensation for all losses, including medical bills, lost wages, reduced earning capacity and pain and suffering. If you have been in an pedestrian accident, contact a personal injury lawyer today.