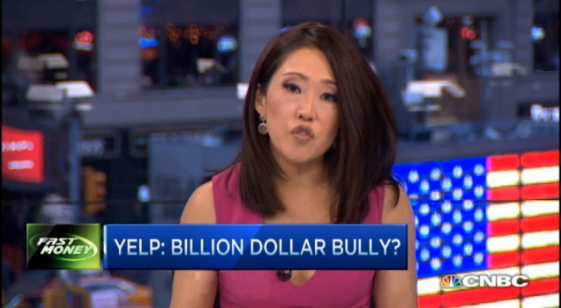 The attorneys of Ellis Law are enthusiastically awaiting a soon-to-be-released documentary designed to expose the unscrupulous business practices of online review site Yelp. The beneficiary of a recent, highly successful Kickstarter fundraising campaign, the film promises to shine a spotlight on what many small business owners feel is, in essence, online extortion for advertising dollars.

We applaud filmmaker Kaylie Milliken’s efforts to expose Yelp’s highly controversial review processes and expect that there to be significant ripple effects from her work.

Billion Dollar Bully is an investigative film meant to explore ongoing accusations against Yelp concerning the falsification and selective inclusion of reviews, high pressure sales tactics and, as some allege, virtual extortion of businesses not wishing to advertise on the online marketing site. Founded in 2004, Yelp is an online resource that permits users to contribute reviews of all types of businesses, from law offices to dentists, dry cleaners to restaurants.

As is the case with many major websites, however, Yelp generates most of its revenue from advertising sales. Many businesses that purchase advertisements from Yelp also have reviews on the site. Controversy has arisen as a result of complaints from numerous business owners who claim that once they declined to spend money on Yelp advertising, positive reviews of their enterprises began to disappear from the site and negative reviews came to the forefront of their listing on the site.

Some of the negative reviews of businesses not advertising on Yelp are, according to the impacted operators, entirely fictitious.

Milliken’s interest in Yelp’s practices began after a conversation with her personal doctor who described her frustration with Yelp and the devastating impact the review site was having on her practice. Unwilling to pay for advertising on Yelp, the doctor began to see her ratings on the site drop precipitously. She also started seeing reviews containing descriptions of scenarios that she had not in fact encountered with any of her patients, leading her to conclude that the reviews were fabrications meant to punish her for not doing business with the site.

According to Milliken, Yelp’s predatory reign of intimidation with regard to small businesses is so pervasive that 8 out of 10 business owners she approached for comment were unwilling to appear on camera with their opinions of Yelp, because they feared retaliation on their Yelp listing, which cannot be removed once created.

Interest in the upcoming documentary is intense, as evidenced by the fact that Milliken’s team exceeded its Kickstarter fundraising campaign goal well before its self-imposed deadline. Media interest in the documentary has been growing as well, ensuring that the allegations contained therein will achieve significant exposure upon release.

Executives from Yelp have strenuously objected to the claims lodged by Milliken and other critics and have pointed to prior legal rulings and FTC opinions in support of their denials. They have also pointed to a study conducted by Harvard Business School researchers which Yelp contends fully discredits Milliken’s claims of manipulation and unfairness. However, authors of the Harvard study have distanced themselves from Yelp’s assertions, stating that their research was not designed to assess the effects of advertising participation on listed businesses, but rather to determine the proportion of false reviews on the website.

Yelp’s vigorous denials seem to suggest its deep concern about the potential effects of the documentary. The day following the release of the film’s trailer, Yelp stock dropped four percent. In May, Yelp’s poor quarterly report fueled speculation that the company could be sold, further girding suspicions about the company’s stability in the face of Milliken’s criticisms.

Championing justice for all

At Ellis Law, we pride ourselves on our history of serving as advocates for those harmed by the negligence or intentional acts of others. If you have suffered injuries, whether to your person or to your business reputation, we want you to know that experienced, knowledgeable help is available. We have secured numerous substantial verdicts & settlements for our clients over decades of advocacy in California. To schedule a complimentary consultation in order to learn more about your legal options, contact us at 310-641-3335.