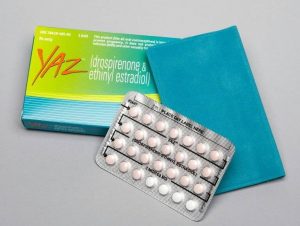 Pharmaceutical giant Bayer Healthcare — the manufacturer of Yaz, Yasmin and the generic Ocella — is now facing more than 37,000 product liability lawsuits involving side effects linked to the controversial birth control pills. Women who have filed a Yaz lawsuit accuse Bayer of purposely concealing health risks associated with the blockbuster contraceptives  The personal injury lawyers of Ellis Law are currently evaluating the claims of women who believe they suffered  the severe side effects that have been linked to the medication.
Launched in 2001 and 2006 respectively, Yasmin and Yaz are fourth generation pills that contain a synthetic progestin called drospirenone – a purported cure-all for everything from premenstrual syndrome to PMDD. In their marketing campaigns, Bayer claimed Yasmin and Yaz could help with a range of conditions, including breast tenderness, acne, irritability, depression, fatigue, headaches and other symptoms of premenstrual dysphoric disorder.
Motivated by persuasive marketing, thousands of American women began taking Yaz, and in 2008, its generic version Ocella entered the market after earning FDA approval. Both the generic formulation and name brands contain the same dose of drospirenone and ethinyl estradiol – two hormones that stop ovulation and thicken the uterine lining to prevent pregnancy.
However, since entering the marketplace, both pills have been the source of heated litigation as patients developed life-threatening blood clot injuries and gallbladder disease after taking the drugs. Plaintiffs say that Bayer should have taken active measures to warn consumers and health care providers about potential Yaz side effects, so they could have made more informed decisions when choosing their birth control.
Over the past year, Bayer has been negotiating settlements with thousands of women who suffered pulmonary embolism, deep vein thrombosis (DVT), stroke and gallbladder problems after taking Yasmin or Yaz.

Medical literature and post-marketing reports suggest that side effects of drospirenone-containing pills like Yasmin and Yaz pose great risks to patients. The medical journal Contraception published a study in 2012 showing a 77 percent increased risk of blood clots among patients who took Yaz or Yasmin, finding that users had double the risk of suffering a stroke compared to women taking older forms of oral contraceptive.
The U.S. Food and Drug Administration (FDA) has issued several safety communications and warnings about drospirenone-containing pills and venous thromboembolism (blood clots).
In April 2012, the agency cautioned: “These two new studies reported that there is a greater risk of VTE associated with birth control pills that contain drospirenone. This risk is reported to be up to 2 to 3 times greater than the risk of VTE associated with using levonorgestrel-containing pills.”
Bayer’s marketing tactics for Yasmin and Yaz came under fire in 2008, when the FDA issued a warning to the company about their overblown claims, noting the ads overstated the efficacy of the pills while understating the risks.
While numerous studies have confirmed the link between Yaz and dangerous blood clots, Bayer maintains that its products pose no greater risk than other birth control pills – a declaration that contradicts the millions of dollars in Yaz settlements paid out to thousands of injured women.

If not treated immediately, blood clots can be fatal since they can block blood flow to the lungs, heart and brain, causing stroke, pulmonary embolism or sudden cardiac arrest. Tragically, Yaz and Yasmin have been linked to at least 23 deaths in Canada – and the bulk of the fatalities occurred in women in their mid-20’s, with the youngest just 14 years old.
In the States, 50 reports of Yaz-related deaths have been submitted to the FDA.

The following life-threatening types of blood clots have been associated with Yaz:

Patients who took Yaz, Yasmin or Ocella in California and developed deep vein thrombosis, or suffered a pulmonary embolism or other blood clot-related injury may be eligible to receive compensation through the filing of a successful lawsuit. Bayer has already paid out more than $1.5 billion to settle thousands of Yaz lawsuits over PE and DVT, in addition to a separate settlement for those who developed gallbladder disease.
Yaz litigation has been coordinated on both the state and federal level to help conserve judicial resources and enable faster resolution to claims. Lawsuits have been consolidated in the Superior Court of California, where Judge Kuhl is overseeing all pretrial motions and discovery proceedings in California state court. Other complaints brought in federal courts have joined MDL 2100 – the Yasmin and Yaz (Drospirenone) Marketing, Sales Practices and Products Liability Litigation in the U.S. District Court of the Southern District of Illinois.
Women are suing for damages including medical expenses, lost wages, lost earning capacity, diminished quality of life, pain and suffering.

Recently filed lawsuits include the claims of:

Women who have taken Yaz, Yasmin, Ocella or other generic versions such as Gianvi, Zarah, Loryna, Syeda or Vestura and sustained injuries are encouraged to talk with an attorney as soon as possible to determine their legal options.

Speak with a product liability lawyer at Ellis Law

Ellis Law firm’s personal injury attorneys have secured over $100 million in settlements and jury awards on behalf of our clients.   Pharmaceutical litigation is a major undertaking that requires legal expertise and vast resources. Our practice has extensive experience litigating cases against the world’s largest drug manufacturers. Our premier network of investigators, medical experts, and researchers partner with our exclusive team of product liability attorneys to build your strongest case.
Call us today at 310-641-3335 to see how we can help you recover compensation for your Yaz-related injury.