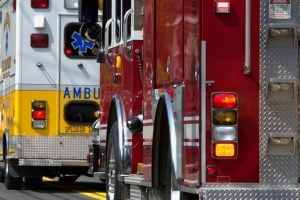 A crossing guard died in Simi Valley on December 18 after being hit by a vehicle that jumped the curb after a collision involving 3 cars. The woman, 62, was apparently setting up safety equipment to help children cross the street at about 2 p.m. near the intersection of Los Angeles Avenue and Socrates Avenue when the accident occurred. She was taken immediately to a local hospital and died shortly after arrival.

The crossing guard’s name is being withheld pending notification of next of kin. Neighbors noted, however, that she was a vibrant woman who had recently retired and was simply helping out a coworker that day.

Second Accident in Area Involving a Crossing Guard During Year

The accident occurred near Arroyo Elementary School in Simi Valley. The Simi Valley Police Department is still investigating the causes of the accident. Tire tracks of the blue Chevy Cruz that jumped the curb were visible on the lawn where the guard was struck.

The Simi Valley Unified School District issued a reminder that drivers need to drive safely in and around the neighborhood’s schools.

This is the second accident involved a crossing guard this year in the school district. The first victim survived.

Police have asked that anyone with information concerning the crash, including videos or other images, contact them.

Accidents like this in the Los Angeles area show how dangerous car accidents can be both to motorists and pedestrians. People can be injured or killed by direct collisions, the choices of other drivers, and even while being a bystander to an accident.

The Ellis Law Firm has two decades of experience in investigating and litigating car accidents in Southern California. If you want to discuss your car accident or pedestrian accident, call a car accident lawyer at Ellis Injury Law at 310-641-3335 today.

All initial consultations are free.