Can I seek lost wages after a car accident?

Can I seek lost wages after a car accident?

Being involved in a car accident is always a scary experience. It’s even more frightening if you or a loved one suffered serious injuries as a result. You’ll likely have significant medical expenses and may have to spend a lot of time away from work, which means you won’t be able to collect your regular paycheck while you’re recovering. Fortunately, a personal injury lawyer can help you recover compensation for medical expenses and lost wages. 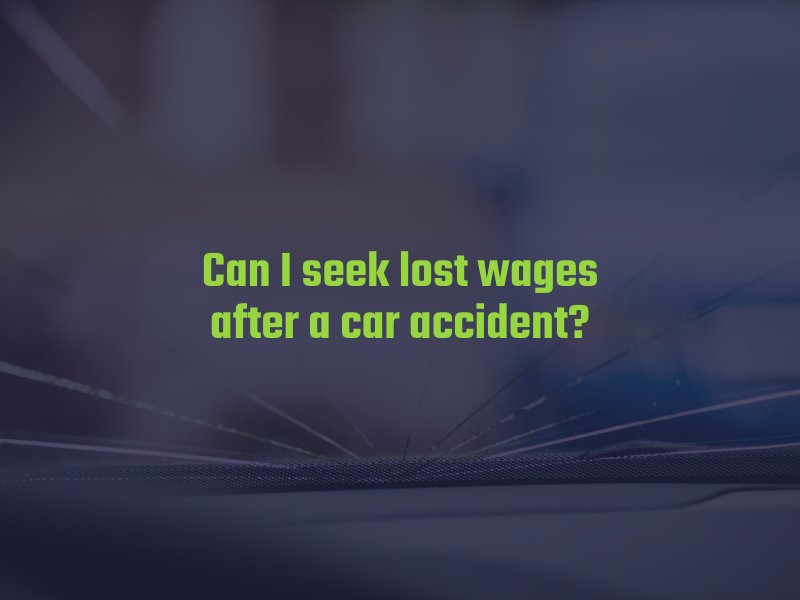 What Are Lost Wages?

In California, lost wages refer to the amount of money the injured party would have earned had they not been injured. It can include you regular pay, overtime pay, payments you would receive from commissions, bonuses, vacation, sick days, personal days, and any other benefits that you lose as a result of not being able to work.

Lost wages typically refers to the amount of money you will lose out on while you’re injured and recovering from that injury – past wages that you are missing out on from the date of the injury until there is a settlement or a verdict. Lost future wages refers to the income that the injured party will miss out on in the future once the trial or settlement is concluded. This can include your typical wage in the event that you aren’t able to go back to work even once the case has been resolved. It can also include compensation for potential raises or bonuses that you likely would’ve received had you not been involved in the accident. This is a bit more complicated to prove, but an experienced personal injury attorney can assist.

If you were injured in a car accident in California, you may also be entitled to monetary damages for lost earning capacity. If your injury prevents you from going back to your previous place of employment and as a result, you will make less money, you can recover compensation for the difference. For example, you were making $90,000 working for a construction company before the accident. After the accident, you’re no longer able to work in construction and have to find a more sedentary job. Unfortunately, you can’t find a job that pays as much, and you’re hired for a desk job that pays $60,000. You may be entitled to recover monetary compensation for the difference of what you used to make and what you currently make, since the lost earning capacity is a direct result of the car accident.

California personal injury cases are governed by pure comparative fault, which will affect how much compensation you’re entitled to receive after being injured in a car accident. Fortunately, in California, you can still recover compensation even if you’re partially at fault for the accident. Any compensation you are awarded at trial will be reduced by the percentage that you are found to be at fault. For example, you were awarded $100,000 at the conclusion of your trial. If the court determines that you were 30 percent at fault, your award will be reduced by 30 percent. Therefore, instead of receiving the full $100,000, you will only receive $70,000.

Your Attorney Can Help Determine What You Might Be Entitled To

In some cases, it can be quite difficult to determine what you’re entitled to. If you have any questions or need help with a claim after being in an accident, contact an experienced Los Angeles car accident lawyer right away.